Michael's appearance (This Is It era) 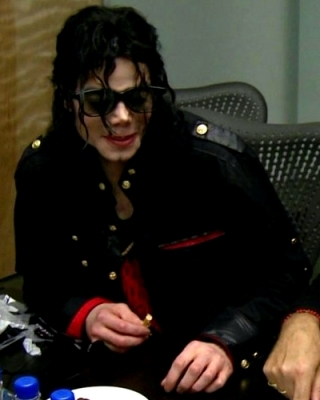 Michael decides to take me out on a date to the movies. Even though there was a significant age difference (me 21, and he 50), I liked him a lot and he liked me a lot, too.

We head to the movies to see "The Berenstein Bears," (y'all remember that children's book), but okay lol however, Michael had to enter one way and I had to enter another. I thought he would have caused a lot of ruckus in the theatre given his mega superstardom, but surprising the people did not really react much. They just smiled and whispered at the fact that the King of Pop had a lady friend on his arm.

We are well into the movie, and I turn to Michael, asking him for the salt & vinegar potato chips. Michael gives me a cute, embarrassed look as he shrugged his shoulders. "Sorry." he said.

I was like dang, this fool ate all the potato chips and ain't leave me none. "Uh-uh greedy," I tease him. Then I ask him sweetly, "Well can you get me some popcorn."

He smiles at me. "Sure, I'll get some sweetie."

I only remember that much...I wish there was more, but hahaha what you think ladies?

You must login (register) to review.